On Saturday, some of my co-workers and I took part in the Sketchcrawl that was happening around the world. Still not knowing Atlanta well enough, I could only think of a couple locations that were not only free, but had a good amount of people and animals to sketch.
First we went to Piedmont Park. There was the threat of thunderstorms all day, but we never saw a drop. Instead it was 85 degree weather with plenty of sun. It really was a great day to be in the park and not only that, the Skyhoundz Disc Dogs competition was going on. Having only seen Frisbee catching dogs on TV or in the movie, Flight of the Navigator, I thought this was really cool. Unfortunately, I was more caught up in watching the dogs competing, than actually drawing them. I did sketch a little, and these are the few drawings I thought were ok: 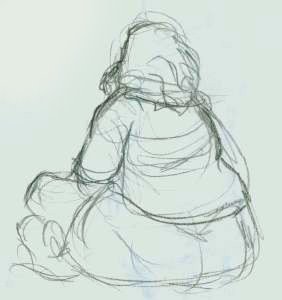 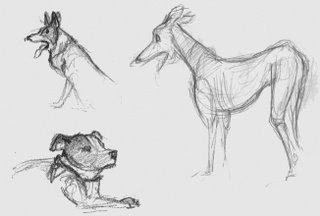 Next we went to the Lenox Square Mall Food Court to sketch some folks. I really felt like I was able to draw a little better here, maybe it's because I wasn't too distracted. 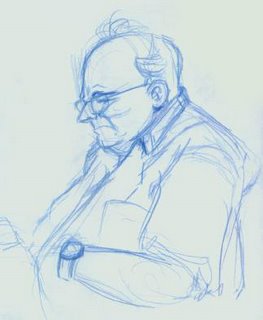 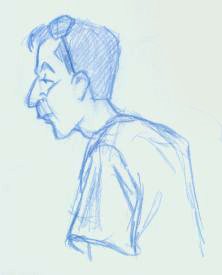 These first two guys were sitting near each other. The old man, was intently eating a fruit cup or some pudding. 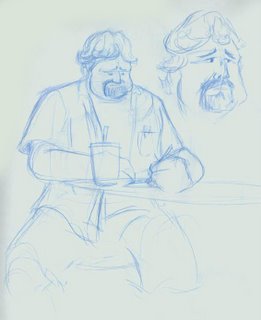 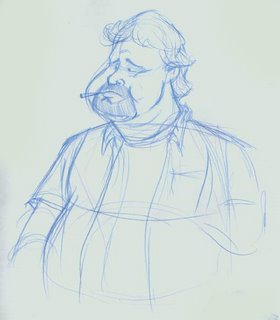 This guy had a great face. The second drawing I really felt I caricatured him well.


On Friday, a bunch of us went to see Jet Li's Fearless

I've never been a huge fan of martial arts films, but I do enjoy the fight sequences in most of them. I also should say I have never been a huge fan of Jet Li either. His acting is usually very stone-face and stiff.
Jet Li's Fearless brought a whole new light to how I feel about these films and of Jet Li.
First off, Jet Li can actually act. He showed a wide range of emotions and I believed every one of them.
Secondly, this movie has a really good story, although I felt the title of it was a bit odd. The story centers on an actual person, Huo Yuanjia (Jet Li), who created the Jin Wu Sports Federation. Yuanjia fought the western influence that was happening to chinese culture, by simply trying to unify the chinese people.
The reason why I feel that the title is odd, is that it's Jet Li playing an actual person. Do we call it Mel Gibson's Braveheart or Jim Carrey's Man on the Moon? I think it's enough for the studios to say that the actor is the star of it, they don't have to declare it as if Jet Li IS the film.
Nonetheless, it was really a well-made film, with great fight sequences and telling a story of the history of a person and culture I know very little about. I would definitely recommend this film.

Ok, my last review is actually for a book. One of my favorite movies of all time is Robert Altman's "The Player" (I should note that Robert Altman's name is not included in the title of the movie, he was the director of it). Michael Tolkin, who wrote the original novel and the screenplay for the movie, has written a new book where we revisit the character 15 years later.

Although I felt that the book's design was a little too simple for my taste, when I saw it in the bookstore I just had to buy it. Overall, I'm glad I did, There were some great moments in it and I really enjoyed just reading more about the characters so many years later. I do have to say, the majority of the book, read more like a film about a dysfunctional family, rather than the story of a Hollywood executive and the dark secrets he keeps. It's even strange that he welcomes sharing these secrets to many people, something that he would've never done before. I think that was the point of the story though, telling the story of a man accepting many of his mistakes and coming of age in his mid-50's. If you're a fan of the movie "The Player" like I am, you might want to pick up the book, it's a quick and easy read, but with some fun, dark moments in it that actually made laugh out loud.

Ok, enough of my babbling. I expect to have a few more sketch posts up later this week. Until then, take care!