Freak Show!!! (and some sketches) 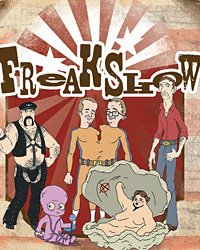 Well I hope you all had a chance to see the Premiere episode of Freak Show on Comedy Central this past Wednesday. If not, Comedy Central is re-running it like crazy, and they're playing it again this Sunday at Midnight.
I animated a few scenes throughout the episode, but the one I'm most proud of is the "pig" scene. I won't say anything more.
Here's a scene I animated that was deleted from the episode (click on the Mrs. Hartsdale Minute):

(There's barely any animation in the scene, but I thought you'd like to check it out anyway).
Some of the folks I work with and myself, had the opportunity to go to NYC to the Comedy Central premiere party of Freak Show. It was a blast. We got to party and watch the show with the creators (and also some of the voices) David Cross and Jon Benjamin, and some of the other voices as well, including Janeane Garafolo the voice of the Bearded Clam (Wet Hot American Summer, Truth About Cats and Dogs, Reality Bites), Brian Stack the voice of the World's Tallest Nebraskan (writer and performer on Late Night w/Conan O'Brien), and Jon Glaser the voice of Log Cabin Republican (writer and performer on Late Night w/Conan O'Brien).
I don't have any pictures from the party yet, but hopefully I'll get my hands on some soon and I'll post them here.

Here are some sketches from the life drawing class last Thursday:
This sketch I'm most proud of (2 minute pose) 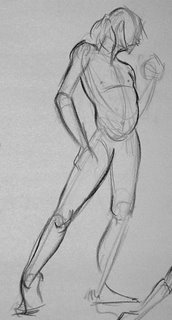 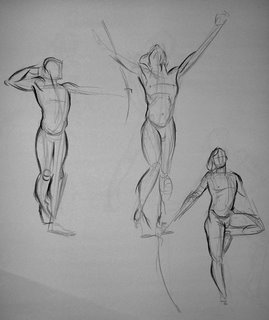 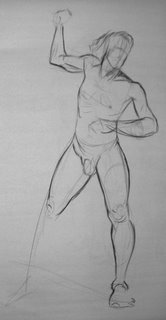 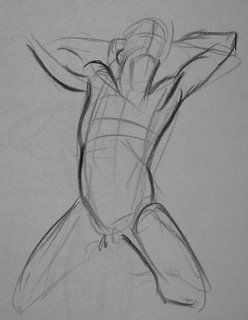 I'm not going to be posting again for another week or so. Taking a trip to Michigan. In the meantime, check out this blog:

DAAAMN boy. I haven't been blogbrowsing for a while and you've left a BOMB on your page. maybe sometime i'll have a moment to put up another one. er well...i need to draw again first. ::slaps wrist:: good job though man! i'll try n catch freakshow soon.

I'm surfing blogs and I come across optionjoe, and think where have I heard that name before.

What's up Joe, it's Jodie from CCS, I think I was a freshman in traditional animation when you were a senior. Congraduations on the show for Comedy Central. So your going to be back in Michigan for a little bit. Are you going to stop by CCS and chat with Steve?